As an expert for engineering and manufacturing services, technology consulting and HR services, ARTS currently employs 500 interesting personalities. They contribute their expert knowledge in various areas. Our series of interviews reports on the success stories of our employees: their path to ARTS, the challenges they face and exciting innovations that drive their work forward.

Since May 2019 Frank Zimmermann has been a Quality Engineer at Airbus Defence & Space in Immenstaad. Although he is still in the induction phase, he is already responsible for a project that is anything but everyday. 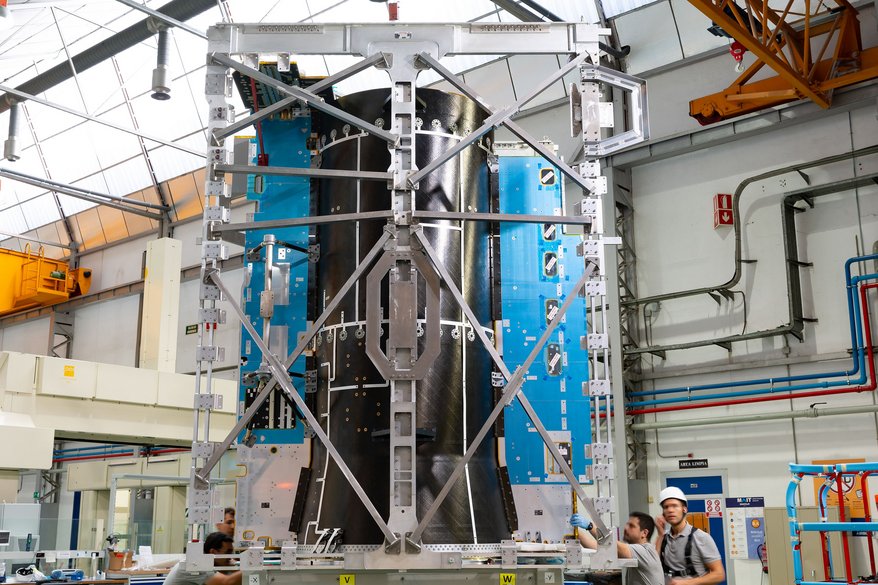 You are an expert in Quality Engineering. What exactly are your tasks?

I am responsible for ensuring and maintaining quality standards. First and foremost, procedures written by specialized engineers must be followed correctly. In addition, it involves the smooth transport, but also the integration and working in the pure area. I am also jointly responsible for product controls, the so-called incoming inspections and outgoing inspections.

In the current project, I am involved in transporting the structure of a probe that we are currently building in Immenstaad. The structure of the probe was developed in France and is currently located near Munich. There it has been tested and finally transported to where the parts will be integrated. I accompany these transports, because with every additional part which is integrated into the structure, its value increases. The probe not only becomes heavier but also more valuable and therefore nothing should fail during the transport. For this reason, I accompany the transports of the probe as quality manager and control them.

What kind of probe is this exactly?

To be precise, this involves the JUICE space probe, Jupiter ICy moons Explorer, which is being built by Airbus Defence and Space and many other partners from Europe for the European Space Agency (ESA). JUICE is being built to explore Jupiter and its three moons Europa, Callisto and Ganymede. The team wants to use the probe to find out whether there are habitable environments and underground oceans on Jupiter and its moons. In spring 2022, JUICE will start its seven-year journey to Jupiter. It will travel about 600 million kilometres in space, using the gravity of Earth, Mars and Venus. This is a huge project and incredibly exciting. This project is something very special and completely different from anything I have done in aircraft construction before.

When everything is completed, I will accompany the transport from JUICE with the Antonov to Kourou in French Guiana to be on site when the probe is placed on an Ariane 5 or 6 and sent from there on its journey to Jupiter.

From A320 to JUICE probe - an exciting journey

Previously you worked as an operational auditor on the A320 in Hamburg. Would you say that your current project is more exciting than the A320?

Absolutely. That's why I even considered this job. Aerospace itself is an incredibly exciting field. In addition, I had the good fortune to be used as Quality Lead in a new project of this size. Every day, I am happy to be involved in this project.

Now we have already talked in such detail about your current project. What did you do before ARTS?

In 2008 I worked for Airbus for the first time. At that time I was able to go to Toulouse to work there after half a year of training as a Quality Inspector for the A380 in Hamburg Finkenwerder. Then I spent three years in Toulouse. After that I worked for Airbus in Hamburg Finkenwerder for one year, before I went to Toulouse again to work on the A350 in the Quality Line Support department for about two years. After my time in Toulouse I was back in Hamburg for a few years. However, after some time I noticed that I lacked the challenge and that I needed some variety again. During this time I became aware of ARTS and got into conversation with a ARTS colleague about the A320. Within four weeks I switched to ARTS and the A320 project in Hamburg.

You've travelled a lot in your job. Is that what excites you?

Actually, I'm the typical North German who doesn't like changes that much. In the past I always had short distances to work and I didn't get around much in the business world. But then I got the offer to work in Toulouse and "licked blood". Out of the normal environment, break the chains and broaden my horizons. After that it was more difficult to be in your usual environment for a longer time. I even bought a house in Hamburg to settle down. But I always need a change of scenery, which is why I decided to go to Immenstaad on Lake Constance. It's a great professional opportunity, I also met my former team leader here again, and the region around Lake Constance is fantastic. The proximity to Austria and Switzerland also has its charm.

If you could choose a country, in which would you like to live?

That's hard to say. There are so many great places in the world. The world is too beautiful to have to settle somewhere forever. A dream would be to be able to travel the world in a motorhome at some point.

What do you enjoy most about your job?

The variety and the new responsibility, which is completely different than in my previous activities. The challenge and the new environment - Lake Constance is really fantastic. It is interesting to experience everything in this way. But above all, I think the possible further development I can make here is great. Out of aviation, into space travel. That's exciting. There aren't many vacancies like this to fill, I don't often get the chance to take one.

What are the challenges in your job?

The A320 in Hamburg is a model that has been built for a very long time. That's why sales of the A320 are going so well. There's nothing new there. All "teething troubles" have been cured, the model is solid and there are no more disturbing factors. That's quite different here at Defence & Space and especially in this project. We' re talking about building a prototype, so no one knows exactly what's coming up, so we have to react spontaneously in certain situations. This is a completely different responsibility I carry here, because up to this point I am the only person present for JUICE quality management.

What was the best decision in your career?

To have gone to Toulouse for Airbus Germany in 2008. Taking the professional step to France was my best professional decision. Out of maintenance and into quality assurance.

What do you value about ARTS as an employer and about working with ARTS colleagues?

ARTS gives me the opportunity to work in companies and projects that I would never have been able to get a glimpse of otherwise.

In addition, ARTS is relatively broad-based and very reliable. The chances that I will be able to work in a new assignment are very good at ARTS. After the end of a project I am not sent home, but a subsequent project is searched and found for me. The colleagues at ARTS always maintain good relations. I can't say anything negative about that.

Mobility is the future

Are you only connected to the aerospace industry or are you attracted to another industry?

I imagine shipbuilding to be very interesting. But I am also interested in helicopter and zeppelin construction. I think this is an incredibly interesting field.

Which innovation would you like to participate in and advance with your work?

I think electric vehicles and alternative drive systems are very important and interesting. Basically, I would like to promote the topic of mobility. At the moment not much is happening on these issues - only a lot is forbidden, a lot is sanctioned but no alternatives are offered. I would therefore find it totally awesome to invest my energy in developing sensible alternatives. Not only to have to punish, but to find incentives to do something new. That's where the future lies - mobility is the future. That is why we have to work on it.