Behind the scenes of ARTS


Behind the scenes of ARTS

In our series of interviews, our colleagues report on their exciting projects at our clients' facilities, at various locations around the world. Even though he is no longer part of the ARTS family, Alaa is taking us on his journey today.

Alaa Issa is 33 years old and comes from the Syrian city of Tartus. It is located directly on the Mediterranean Sea - not far from the Lebanese border. Here he was born and grew up. In April 2016 he came to Germany with a student visa for a master's degree program.

You were born and raised in Syria and you also attended university there, what did you study?

After graduating from high school I started studying mechatronics at Tishreen University in Latakia. In Syria the studies usually take five years, the degree is comparable to a bachelor's degree in Europe. After that I wanted to continue with my Master in Technology Management. This was a distance learning program, but I could not finish it in Syria. I came to Germany in April 2016 with a student visa. At the beginning I was in Berlin to take a German course there and then I wanted to go to the TU Dresden to continue my studies there. However, I changed my plans at short notice because I already knew a friend in Germany who told me about Dresden and also said that it is very difficult to find an apartment in Berlin. So I came straight to Dresden and got my studies from Syria recognized here. So I am now a recognized engineer in Germany as well. Now I have been living in Dresden for about 4.5 years and feel really comfortable.

Why did you decide to study mechatronics back then, what fascinated you about it?

After graduating from high school, Syrian students get their results and based on these results the decision of the course of study is made. This is similar to the Numerus Clausus in Germany. I had very good results and was therefore allowed to study engineering. My heart beats especially for mechanical engineering. Since my childhood I like machines and I like to work with my hands. These two reasons together made me decide to go this way and until now I think it was a good decision.

What do you particularly like about your new home in Dresden?

In the 4.5 years that I have lived here, I have seen a lot. The Elbe is very beautiful, especially in summer. I have always lived near the Elbe. In the beginning I lived in Johannstadt, right on the Elbe. From my current apartment, it is not far to the river. This is very nice for me, because I like to ride my bike. I have developed a good circle of friends here, with whom I like to meet in the new town. That is actually the most important thing for me. I wouldn't move away again and start all over again in a new city.

How did you gain a foothold in Germany professionally?

When I arrived in Germany, I immediately started taking a German course. This was not a completely new language for me, as I had already learned German in Syria and had an A2 level (according to the European frame of reference). At the adult education center I took different courses and exams up to my current level C1.

When I finished the exam for the B2 level, I started looking for a job. The Arbeit und Leben in Sachsen Verein supported me in this search. And so I got my first job, an internship at the Fraunhofer Institute. After my internship I signed a contract there and was allowed to work on an independent project for one year. It was about ultrasound, which was completely new for me at that time. I hadn't worked with ultrasound before and learned a lot during this time.

After that I went to Vision in Automation and started as a design engineer. There I was involved in the construction of assemblies and also designed devices for storage and automation in clean rooms. But I also helped with the assembly of these assemblies or complete systems at the customers and in clean rooms. I worked there with a different program than at the Fraunhofer Institute. This programming language was new to me and so I decided to do a further education to become a better designer. This was the next step in my career. The training lasted about six months and I could learn a lot about different design programs.

And then I joined ARTS in March 2020. Here I worked as a design engineer for a customer in the form of a temporary employment agency. Unfortunately my assignment, like many others, was over after a short time due to the pandemic and I applied again and looked for work. This was not easy at that time because of course all companies had to struggle with the situation. But ARTS tried very hard to find a new job for me and that worked out great.

Now you have been with Insecotec GmbH for almost a month. What exactly do you do now and what is particularly exciting about it?

I had applied for my settlement permit, but for this it is necessary to show an existing employment relationship. Therefore I absolutely needed a job. ARTS was very committed to me and so I came to Insecotec GmbH. There I started on November 1st and I am working in a project that deals with the construction of a transport system in a clean room. It connects the warehouse and the workstations in the clean room and of course fully automatically. We are now starting from scratch and building everything up. That is very special for me. The team is super nice and the work is exciting and it is great to see how something is created. I have worked in the cleanroom before, but now I am part of it from the beginning and benefit from my experience.

It is a pity that I am no longer with ARTS, but I really like Insecotec GmbH. Everyone is very nice, I have great contacts and a nice team around me.

You already told me that you have been speaking German for a long time, was it difficult to learn the German language?

I think if you speak English, it is easier to learn the language. I also learned English at the university back in Syria. But now I speak a lot of German with my friends here, actually only German. That's why my English is not as good as it used to be, but that comes back through work. The languages are very similar. Native speakers surely see it differently, but for me it is like that. That's why in the beginning I always thought English first and then German in my head and that was easier for me.

Nevertheless, the exams or the stress before the exam was always a challenge for me. Now German is no longer a foreign language. Maybe I'm a bit slow and don't say everything really well, but already quite fluent. I think the important thing is to speak in everyday life and not to be afraid, but to be brave and speak. Then that works too.

Besides your job, you are also a volunteer, what do you do?

3 years ago I taught Arabic at the TU Dresden. I did that through the Initiative German Course for Asylum Seekers (IDA). They do voluntary work and they try to bring people together. I knew an organizer of IDA who asked me if I wanted to teach Arabic and then I taught about 25 students once a week for 2 semesters.

I also like to make music and have been playing in the orchestra "Paradiesisch Musizieren" for several years. I play oriental violin and piano. Normally we rehearse every week, but now it's not possible. But we have also had many performances in Leipzig and Dresden and actually all over Saxony. Through the music and playing in the orchestra I have met many people and made friends. They are my closest friends and that's so nice because they come from many different countries and many different cultures come together. We always have a lot of fun. 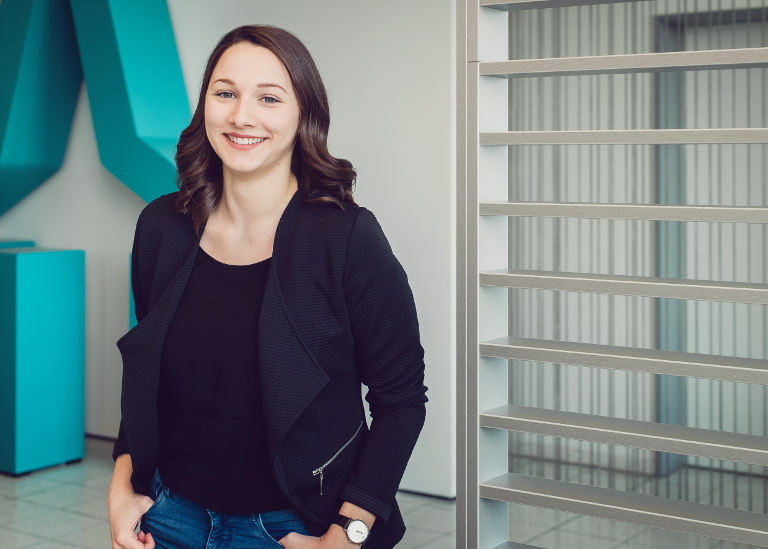