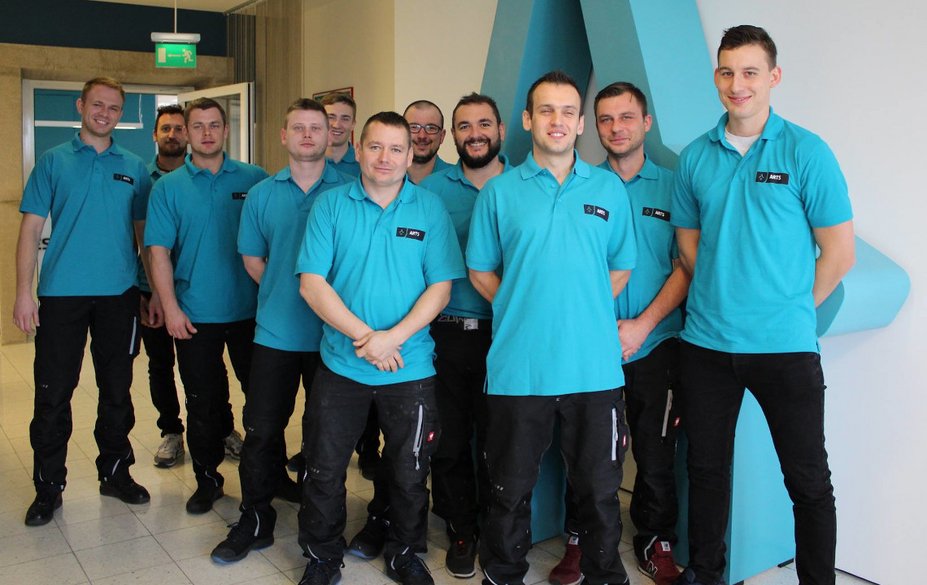 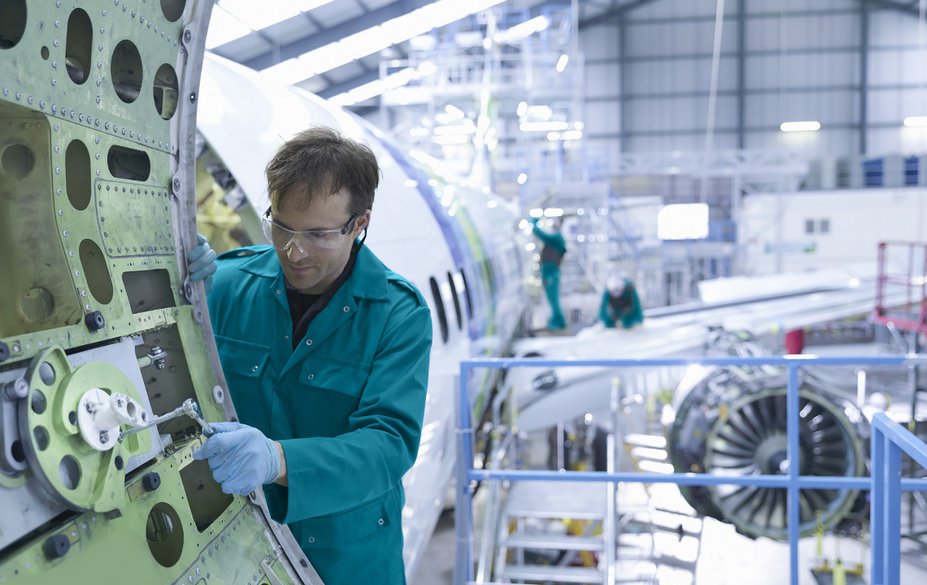 The three colleagues has been part of the 12-member Mobile Aircraft Maintenance Crew (MAMC) team at the A380 Door Modification Project. The team is responsible for replacing, attaching, removing and installing the elements on all doors of the Airbus A380 in Dresden. Precision and reliability play a major role in this work, which is characterized by high time pressure, because the A380 is only on the ground for a limited time. "Nevertheless", says Konrad Stefaniak, "working in an international team is very pleasant. We don't have any problems due to a lack of material, we don't have to improvise, like in Poland". Both Polish aircraft mechanics, Konrad Kisiel and Konrad Stefaniak, saw in Germany the opportunity to develop their careers and to work on new and interesting tasks in the aerospace industry.

Skilled workers as a key element of business success

According to the Federal Ministry of Economics and Energy, the situation regarding skilled workers in Germany in 2019 will be largely stable across the country, but demographic change offers an opportunity for skilled workers from abroad. Finding well-trained aircraft mechanics and aviation engineers is not easy. Even in the automotive, aerospace and shipbuilding industries, the search for experts is always an issue. Again and again, German companies complain that they cannot fill all the available positions. The unemployment rate in Germany, has been a political success for years and was only 4.9% in December 2019, which in total about 2.2 million unemployed people. The balancing act between economic growth, sufficiently affordable skilled workers and the lowest possible unemployment rate is a balancing act. According to the Federal Employment Agency, demographic change is one of the major future challenges.

The facts speak in favour of increased searches for suitable personnel abroad and of putting a lot of energy into international recruiting. We also want to attract and retain skilled workers for the company in order to counteract the demographically caused shortage of skilled workers in the future. Even more so because international skilled workers are considerably younger than German ones and thus counteract the aging German population, they are particularly in demand on the German labor market. Many German companies have recognized this and are already offering their employees and potential employees numerous benefits and support for their entry into Germany and for the much-cited German bureaucracy.

ARTS, as a globally active expert in engineering and manufacturing services, engineering consulting and HR services, already employs 14% of its employees from abroad. ARTS is therefore particularly committed to the recruitment of international specialists and offers its international employees not only assistance in applying for a BlueCard, with bureaucratic or language barriers and finding accommodation, but also regular specific training courses and language courses, as well as a comprehensive welcome package. "We had no bureaucratic hurdles to overcome. The colleagues at ARTS took care of most of the work, so that we could start well prepared and participating in the project without any problems", the interviewed colleagues reported.

Working for ARTS as an EU citizen

Finding qualified employees is often not an easy task, but the unrestricted free movement of workers offers new opportunities to foreign applicants and companies. The employment can be pursued in Germany and in other EU countries without any problems. At ARTS we also believe in an exchange of nations.

Conditions for non-European employees at ARTS

International applicants and employees who do not come from the EU, the EEA and Switzerland are more rare at ARTS. Two percent of our experts come from third countries. ARTS hires qualified foreign employees, but the focus is on filling the advertised positions quickly, which is difficult to do with applicants from third countries. The organizational effort, compliance with conditions and legal requirements can take eight weeks or more. By then, the position to be filled is usually already filled, before the potential international candidate can start. It is therefore a great organisational and time-consuming task for companies to employ workers from third countries. The Immigration Act, which comes into force on 01 March 2020, is also intended to expand the framework for the immigration of skilled workers from abroad. A need-based immigration into the workplace is being targeted. Securing the demand for skilled workers is a fundamental goal of the German Federal Government and the new law is intended to contribute to strengthening Germany as a business location.

The EU Blue Card is particularly interesting for highly qualified professionals with academic training. It is issued if a German university degree is available, the degree is recognised or is comparable with a German university degree. In addition, a binding job offer or an already signed or existing employment contract must be available. In addition to these two points, a gross annual salary of at least 56,800 euros (as of 2021) must be achieved in order to receive the EU Blue Card. This value is only valid for the year 2021, as it is based annually on the contribution assessment ceiling in the general pension insurance.

For so-called shortage occupations, for example for engineers, IT specialists and health experts, the gross annual salary is at least 44,304 euros (as of 2021). Foreign workers in these occupational groups require the approval of the Federal Employment Agency. It checks whether the EU Blue Card can be issued to this group of persons and whether the working conditions correspond to the usual local standard. A priority check is not carried out here. However, if the degree was obtained in Germany, the Federal Employment Agency does not need to give its approval.

In a preliminary interview at the immigration office, the prescribed salary and the type of employment must be proven on the basis of the employment contract. Furthermore, the following documents and papers must usually be submitted: Job description, tenancy agreement, proof of health insurance, proof of securing livelihood, if available last three salary statements, proof of a university degree accepted in Germany, biometric photo, completed form "Application for a residence permit" as well as a valid passport. If the interview was successful, the issuance of the requested title will follow.

If the employer intends to employ the employee as a temporary worker, the ZAV will refuse to give its permission because, among other things, targeted immigration is not possible. Also, the exact activity of the temporary employee is not known from the beginning, which is why the ZAV does not agree to the employment relationship.

In addition to intensive international recruiting and needs-based benefits for foreign specialists, globally active companies are increasingly addressing the issue of diversity management and have begun to reorganize their organizational structure. This will make it easier for international specialists to enter the company. Companies are better prepared for foreign specialists, whether through a more cosmopolitan corporate structure that allows internal and external communication in different languages and understands cultural differences as an opportunity to implement new innovative ideas in the organization. They analysing their own structures and long-term needs and adapting their structures to be more attractive and well prepared for international professionals.

"I decided to work in Germany because I wanted to learn something new. In Germany I have the opportunity to work in an international team and to perform different and challenging tasks. I don't have this opportunity in Poland," said Konrad Stefaniak. "The work ethic and the interaction with the people in our project team are very motivating. We receive great recognition for our work". A dream has come true for both of them to work in the aviation industry. "It makes you feel like you're involved in something special," adds his colleague.

In fact, every employee had different motives why they came to Germany. For example, Antonio José Alcaide Gomez came to Germany from Spain in December 2016 because he saw the opportunity "to lead a better life in Germany than in Spain and earn good money. And he was not disappointed. He feels very comfortable in Germany, is treated with respect and likes to go to work. "It's not so important what country you're in, much more important is the team climate and the joy of the job." "But," says Antonio, "in Germany I have to overcome bureaucratic hurdles again and again. As soon as you move your finger, you have to fill out a form," he jokes. There are forms for everything. That's easier to handle in Spain. At this point, the authorities in Germany should develop further. Despite all this, Antonio always had the support of ARTS staff if he had questions or problems.

ARTS shows how it works. ARTS lives the culture of welcome and offers its future employees a feel-good package for a smooth start in Germany.

The three colleagues from the MAMC have no regrets about coming to Germany and recommend to their international colleagues who are considering working in Germany, "Don't think twice and don't be afraid of the challenges. Just come here! Working in Germany is a great experience and very enriching."

These are just three of the 500 employees at ARTS, whose professional expertise is an enrichment for the company. ARTS continues to grow and always needs qualified international experts for further exciting projects in Germany. If you dream of working, contributing and developing in internationally operating high-tech companies, apply for a job at ARTS. We look forward to hearing from you!