The time of classic working time models seems to be over. Flexitime, trust-based working hours and home office options increasingly ensure that "nine-to-five" becomes an individual design project. On Tuesdays you can leave earlier, but on Thursdays a little longer and on Fridays in the afternoon only from home. Working hours have probably never been as personalised as they are today.

In recent weeks another idea has also caused a great stir: the 4-day week, proposed by the IG Metall trade union. Although this is not the first time it has been discussed, the motives behind it are different this time. The chances of success of implementation also seem to be high at present. 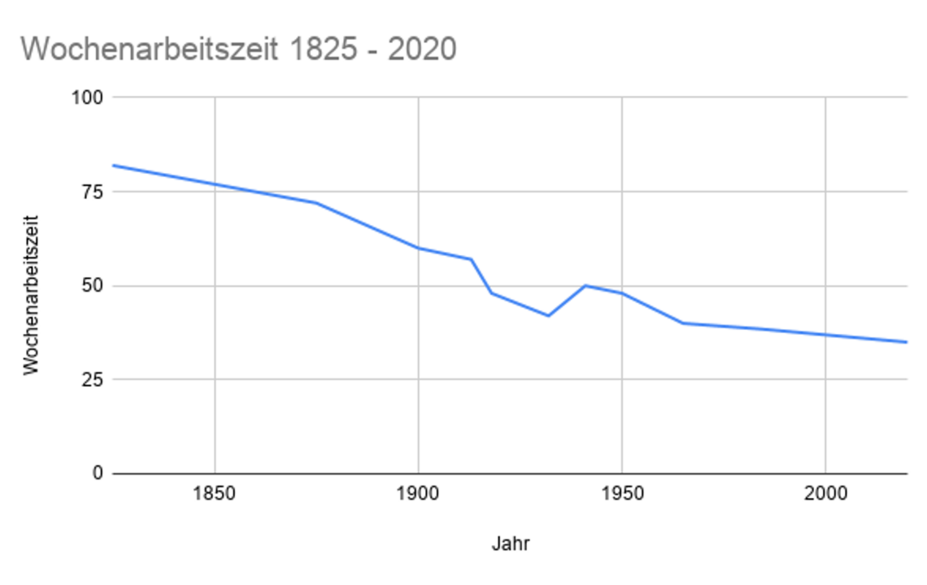 In view of the weekly working hours in the last decades, this advance seems to be a continuing development. The average weekly working time has decreased by more than 50% since 1825. A trend that only came to a stop in the post-war years. At the end of the 19th century, a 7-day working week was still the norm. 70 to 80 working hours were considered the rule. This changed around 1900 when the 6-day week with around 60 hours was introduced. This was followed by the 8-hour day in 1918, the transition to the 5-day week in 1956 and the gradual introduction of the 40-hour week in various industries in the 1960s and 1970s. For many, however, this 40-hour week is no longer the norm for full-time employment.

In Japan, Microsoft has tested a 4-day week with a full wage adjustment with its 2,300 employees and has reported a 40% increase in productivity.

Volkswagen has already tested an even more "compact" model. The 28.8-hour week, which was introduced in 1994, has largely prevented redundancies. Could this also be a model for surviving the current Corona crisis?

In the crisis - less is more

Many companies are currently using short-time working to safeguard jobs. The working hours of employees are reduced in the process. The hours lost in each case are then compensated by government funding at 60% of net wages. A model that works in emergency situations.

With a general changeover to the 4-day week, the many small and medium-sized companies that characterise the German economic landscape would hardly be able to cope with such a wage compensation with reduced hours.

In sometimes existential situations, such as the current one, however, the trade unions and employees also seem willing to talk. Even more since such a development could also be in the interest of each individual. Not only the preservation of one's own job is an important point. As late as the 1950s, "Saturdays my daddy belongs to me" was written on posters. The need for more time for private life, more opportunities for individual development outside of working life and more "work-life balance" - they now seem more topical than ever.

What remains is the question of implementation, which - like so often with modern forms of working time organisation - is a very individual one. Whether 4 days or 28, 30, 32 hours. What is more worthwhile - short days or short weeks - is to be decided on a case-by-case basis and depending on the possibilities. And also: 4 days - what does that mean in concrete terms? A long weekend, 2 times 2 working days or 3+1? What basic conditions does the chosen system need? The possibilities are manifold. We help companies to answer these questions for themselves and to change the parameters needed to make the changeover as smooth as possible.

Something that should not be ignored: Here the useful is combined with the sensible. The possibilities and needs of both companies and employees must be taken into account. Not every company can make a reduction in working time possible for all employees. Not every employee can easily allow himself to work one day less from now on. And not every company and not every employee wants the same thing. Common, sensible solutions that suit everyone can be found jointly. And these are sustainable. From our experience, many of the wishes can be combined. Often the impulse from the outside helps to think about new ways and not to fall back into old patterns of behaviour or thinking.

When companies are threatened in their existence, it helps if everyone sets back a little for themselves - perhaps even longer than the means of short-time work allows by law. Reduced working hours can, for example, allow work processes to be reflected and limited to the steps that are really necessary. Ultimately, this is how further development can take place even after the crisis and then perhaps lead to an agreement on the reduction of hours.

If such a development is seen as an opportunity, both sides will benefit from the positive. Companies can regenerate, with potentially greater financial scope and employees, with a better balance between work and life.

In the times of the lockdown, we have experienced very closely what added value having time for other things can be. For all the projects that have been postponed for so long.

Remain flexible - even after the crisis

Anyone who wants to return to post-corona times, to "real" full-time work, should be given the opportunity to do so, depending on the company's situation. And those who feel comfortable with 4 days of work per week can use the insights gained from short-time work to initiate the establishment of this system in the company.

Changes sometimes come faster than expected. The first paid leave under the collective agreement was in 1903, when the Central Association of German Brewery Workers fought for something revolutionary: 3 days paid leave per year. The continued payment of wages in case of illness for all has only existed since 1970. Who would still consider a 4-day week impossible on the basis of such developments?

The majority of the 10,000 respondents to the study "The Workforce View in Europe 2019", for example, were in favour of working 4 days a week instead of 5. More than three-quarters of the participants, from eight European countries, stated that they would favour such a possibility if wage compensation were provided, for example if the same working hours were distributed differently - this could also be a 4-day model. Ultimately, what is needed is a system that can represent both the company and the employees. In the best case, both sides will see improvements such as efficiency gains, increased satisfaction and fewer days of sick leave.

How would you design it for yourself? How many days, with how many hours? You see, there seem to be countless possible combinations. This is another indication that whoever says that the time of classic working time models is over is right.